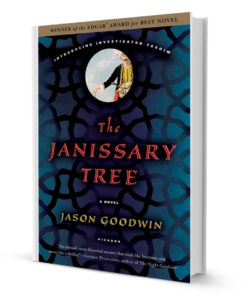 A concubine is strangled in the Sultan’s palace harem, and a young cadet is found butchered in the streets of Istanbul. Delving deep into the city’s crooked alleyways, and deeper still into its tumultuous past, the eunuch Yashim discovers that some people will go to any lengths to preserve the traditions of the Ottoman Empire.

Brilliantly evoking Istanbul in the 1830s, The Janissary Tree is a bloody, witty and fast-paced literary thriller with a spectacular cast.

Praise for The Janissary Tree

The richly detailed evocation of the period, which gives The Janissary Tree such an authentic feel, is combined with a playful humour and a hero unconventional enough to rival Boris Akunin’s Erast Fandorin. — The Times, June 2, 2007

This congenial murder mystery, blending historical scholarship and deft characterisation, is upmarket crime fiction with a smile on its face. — Sunday Telegraph, June 3 2007