The great traveller Jan Morris always likes to visit a courtroom and to hunt down a Henry Moore statue when she gets to a new city. She gets a flavour from the crims and lawyers, and she seems to regard a Henry Moore the way I do a fictional detective – part of the paraphernalia of modern cityhood.

Is there a city worth its salt which cannot boast a fictional PI, forensic investigator, police detective or even a gifted amateur sleuth? I wonder. Some cities field so many fictional detectives that the real mystery is why they don’t meet. When I met Arnaldur Idradasson, writing about Rekjavyik, he admitted that he not only had to create a detective for the city, he had to invent an entire homicide squad. Iceland does not have a homicide squad. But he also brings the city he writes about to life; gloomy, but alive.

Izzy and I eat breakfast in a diner on the way to the city art museum. It is run by a Greek with a huge patriarchal beard and kindly eyes. We have grits and bacon and curious strips of ground, mixed beef and lamb, called gyros and pronounced, according to our host, like the very single currency with which Greece itself is struggling.

Instead of a courtroom, I choose to see the Eudora Welty House. Great, late, witty Southern writer, she wrote great short stories – The Petrified Man is superb – and won a Pulitzer Prize for The Optimist’s Daughter. She also received a special Reader’s Award from the Mystery Writers of America, in the form of a ceramic raven. She was a great reader of detective stories. She had a twisted mind and a perfect ear for the cadences of speech; southern speech. It is, Izzy points out, rewarding but oddly tiring to read some of her short stories, because you have to keep putting on a southern accent in your head.

The raven turns out to be the only award on display in the house. It sits in her spare bedroom, on the side table. The Pulitzer, meanwhile, is hidden in a box in a cupboard.

I have mixed feelings about this. I was not at the ceremony to collect my Edgar Award from the Mystery Writers: my publisher was too cheap to take the risk of bringing me to NYC, on the reasonable assumption that I wouldn’t win. She collected it on my behalf, a china Edgar Allen Poe.

She still has it. I have even seen it, in her office. I have suggested bringing it away but she is afraid it might break.

I told a bookseller in Philadelphia about this once, and he very sweetly fetched a plastic statuette of Edgar Allen Poe with a huge nodding head on a spring. So I have that. 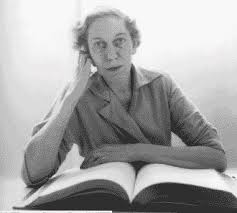 The reason to visit a house is, of course, to get inside a house in a strange town.

Eudora’s house is plain, large, straightforward and full of light. She has 5000 books, according to the guide; some of them are the same editions as mine – I notice Waugh’s Letters; but as Izzy points out, if she has 5,000 books we must have 15,000. Bibliomania is a disease, but a vaguely social one.

Eudora had a big garden, divided into rooms; the rose garden is full of English and Irish roses. The trees have just come into leaf. She died less than ten years ago, in her nineties, having never married; she always meant to leave her house as a museum and so, towards the end of her life, she had volunteers from a museum trust re-doing her garden for her and cataloguing everyday objects and books in her house. She was, in fact, curated to death. But it must have amused her to have the garden done so nicely for nothing.

Later I bite the bullet and go to Lemuria Books, to talk and sign copies of An Evil Eye. It is a beautiful bookshop, on the first floor of a small block off a ten-lane highway. For Jackson, I suppose, that’s a neighbourhood. The guys and girls who run the store are also funny and welcoming.

We are impressed by the hugeness of the South, especially the enormous dedication to cheese. It appears everywhere, sprinkled on our sweet-potato chips, welded to a fish fillet, draped odalisque-like over a burger, grated into a salad. It is a very cheese friendly place.