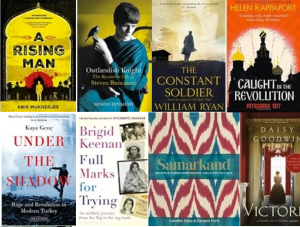 These are some of the fantastic books that I’ve enjoyed this year. All ten were published in Britain, but they have taken me through time and space as only good books can – to Calcutta and the Sudetenland, Swinging London and revolutionary Petrograd – and even to Palmyra, when it was a pristine ruin. With Queen Victoria I’m on home turf – see below. We go to Turkey, too, because it matters to us all – Turkey and Russia, Turkey and Europe, Turkey and the Middle East – raising some big questions for 2017.

A RISING MAN
by Abir Mukherjee

An assured debut crime story which introduces us to Captain Sam Wyndham, in the Calcutta CID, playing the endgame of the Raj

A tense and gripping wartime thriller, which also moved me to tears

PALMYRA 1885: The Wolfe Expedition and the Photographs of John Henry Haynes
by Benjamin Anderson and Robert G. Ousterhout

A chronicle of a lost world, rediscovered in these superb early photographs

If you read one memoir this Christmas, make it this. The Raj-to-rag trade memoirs of a fashion editor in 1960s London made me laugh aloud in bed.

UNDER THE SHADOW: Rage and Revolution in Modern Turkey

Kaya Genç takes the temperature of Turkey’s angry young activists, of every persuasion, and meditates on his country’s past and future

TURKEY: The Insane and the Melancholy
by Ece Temelkuran

A powerful exploration of the forces shaping modern Turkey, for good and ill

CAUGHT IN THE REVOLUTION

Eye-opening witnesses to history: a masterly retelling of the cataclysm of 1917 through the experiences of foreigners in Petrograd

A rollicking novel by my sister, who also wrote the ITV tv series.

SAMARKAND: Recipes and stories from Central Asia and the Caucasus

The title says it all. A gorgeous book with must-try recipes from Central Asia.